I can see a number of benefits in marrying a Vocaloid lady – but also some potential pitfalls.

Although I am now much too old to start thinking along such lines myself, I have at least given it some thought, primarily because of comments I have seen on YouTube where I have read several wishes for one or another of the Vocaloids to marry the commenter.

I have thus considered the subject in some depth, and come to the following conclusions. They are, I think, significant! 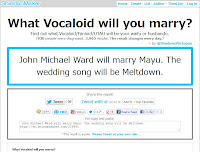 Incidentally, if I had seriously considered marrying a Vocaloid myself, this site tells me that I'd have married Mayu (who is the first yandere Vocaloid so this is something of a dangerous proposition!) and that the wedding song would be Meltdown.

If it hadn't been for Mayu's latent psychotic nature I have to admit that the idea does have some appeal...

Therefore, do be aware of these bullet points (and I am sure there are many others) should this become legally possible one day and you feel inclined to pursue it. There is a legal question regarding Rin, who (at 14) is technically 'under-age', as is her twin brother Len, and Mayu herself is just 15; but no problem for any of the others, from Miku (aged 16) to Meiko (aged 31).

First, the plus points...
However, there are some negative aspects too...
Overall, I'd say there's much to commend the idea, but you have to go into it with your eyes wide open. It'll be no use complaining that there's nothing to cuddle, after the ceremony – though that also means no cold feet on your legs in the bed, so perhaps even that isn't necessarily a bad thing!
Posted by John M Ward at 17:53