Playing a part while dressing up as a character – costume playing or 'cosplay' for short – is a long-established activity, with Japan almost certainly being the world leader in this area of activity.

That isn't surprising, as the Japanese have long had a rich panoply of colourful and memorable characters who, even when sharing a generic style, have more than enough distinctive visual and behavioural distinctiveness to make each stand out.

I have featured photographs and videos with cosplayers (or 'cosers' as they are sometimes known) in recent months in particular, and occasionally prior to that. With all that head start, and all the anime and similar festivals that have been held in Japan for many years (such as the famous Wonder Festivals) there has been plenty of incentive and opportunity for cosplayers to 'get out there' and strut their stuff.

My own recently fantasy revolved around aspects of this, by the way, even though I wouldn't have been in costume myself, merely helping out by filling in with those who were. It would be me, and them, whom the audience see, not just the (in that case Haruhi Suzumiya) characters whose costumes they'd be wearing.

And this is a key ingredient: cosplay means that it is the player as much as the character who is presented; and I imagine it's a great ice-breaker for the inherently shy members of Japanese society to be able to approach a familiar character and at the same time meet a real-life person. This is the greatest difference between this activity and where the character has to be the whole package.

Take the recent launch of the Project Diva-F PlayStation game in Japan, for a good example. On that occasion, it was 'Miku' who had to be there in person, not so obviously someone dressed up as here, so what is called Mikudayo 2·0 did the job, as in this video (Mikudayo version 1 is a grown-up size Nendoroid-style 'chibi' Miku, by the way)...


You have to admit, they really do go to town on this sort of thing in that country: it's big business, of course, but it's also so easy to put your heart and soul into it, as even the company executives do just as much as any teenage fanboy geek!

So, in the west, what do we do? Well, there have been western cosplayers for years, though it hasn't been all that widely known. I have been aware of several for quite some time, though most are the wrong physical shape (too chunky) to carry it off as convincingly as they might otherwise have done. Also, many do not have the natural and unforced cuteness that typifies so much of the female character base from which our cosplayers are working.

Don't get me wrong: they have worked hard and really do try to make it work, with perhaps unexpectedly good results overall, but we really needed someone special to lead a more serious challenge to Japanese dominance. 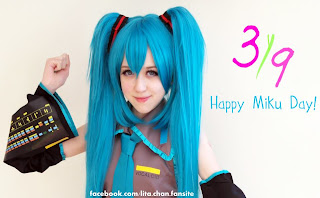 Enter Lita Chan, who is near-enough perfect for this, and one of those few literally stunning ladies that genuinely does stop you in your tracks if you were to encounter her – certainly any fellas with good taste, and I suspect some envious ladies would find themselves (no doubt involuntarily) reacting as well.

I make no secret of my appreciation of ladies such as this, and freely admit that I have been impressed with Lita Chan's Vocaloid cosplay of Miku and, equally, Rin Kagamine, among others.

I foresee a tremendous future here, and (in a little while, when it all starts to really dawn on the west and we begin to catch up with the east's enthusiasm and fandom) fame and demand for the lady, and hopefully others who will follow her lead. The important thing is for her to stick with it, even when (as apparently happened yesterday) it can become tiring.

The trick is to pace yourself and not try to do too much at once: there's always another day, and the world isn't going away any time soon! Younger people have more time left to them that those of us in our 'sixties, and yet even I am content to leave things to another day if I find I am trying to do too much too quickly. It also gives Mum more time to make the costumes.

I know that Lita's manager already has that confidence and faith in her, and I too am getting a strong feeling that we have someone truly special here, and we need to nurture her and not burn out this wonderful asset to the whole fan-based community.

We here in the west still have a long way to go to develop our culture in positive and non-harmful areas of pursuit such as anime and Vocaloid appreciation, and the sheer sense of 'joining in' that in-character cosplay engenders.

We can be thankful for the likes of the MikuUK project for the concert in Scotland, the ever-growing existing fan-base in countries such as the UK, Brazil, Canada and the USA, and those such as Lita Chan who are prepared to lead the way by showing even us reserved Brits that it's okay to dress up as a character and pose and act in a fun way. It's been done, it's lots of fun, and we can all join in!
Posted by John M Ward at 13:20