All's Well That's Carswell – or is it?

News today that Douglas Carswell – the original Conservative sitting-MP defector to UKIP – has left that party comes as little surprise: pundits and commentators have been expecting it for some time. He will now sit as an Independent.

Thus UKIP, which has never has had one of its own people elected to the House of Commons, has gone from no MPs to one (defector), and then to two with the second defection by Mark Reckless shortly after, then back to one a mere six months later, and now zero again, less than two years after the last General Election.

The timing of this move is interesting, coming as it does at a slightly odd time. Douglas states his reason as being the completion of the mission to leave the EU – but we haven't yet done so. Article 50 is to be triggered just four days from now, so if that was the reason why didn't he at least wait until then? The Referendum was held months ago, so that wasn't the cause either.

Apparently he has been liaising with senior Conservatives with the apparent aiming of rejoining his former party. I don't think that would go down well among the party's rank and file membership, and is something that I'd recommend be seriously pursued.

ANother ingredient in the mix is the possible imminent launch of UKIP big sponsor Arron Banks' new party, provisionally called the Patriotic Alliance. The feeling I get with that, though, is that he might be even less welcome there than back in the Conservative fold. I could be wrong.

In recent days, though, yet another movement has surfaced: this appears to be some kind of 'New UKIP'. While that is probably a dead-end route (the analogy of stopping digging when you're already in a hole of your own making springs to mind) it might provide a new home for Douglas C. I have no idea if that is even on his radar, but as mere speculation it is worth airing as one of the possibilities.

Behind all of this, though, I suspect is the realisation that UKIP – which I have long stated is a dead end – is dying, as polls and by-elections have been clearly showing. Here's Britain Elects' poll-of-polls graph covering the period since the May 2015 General Election… 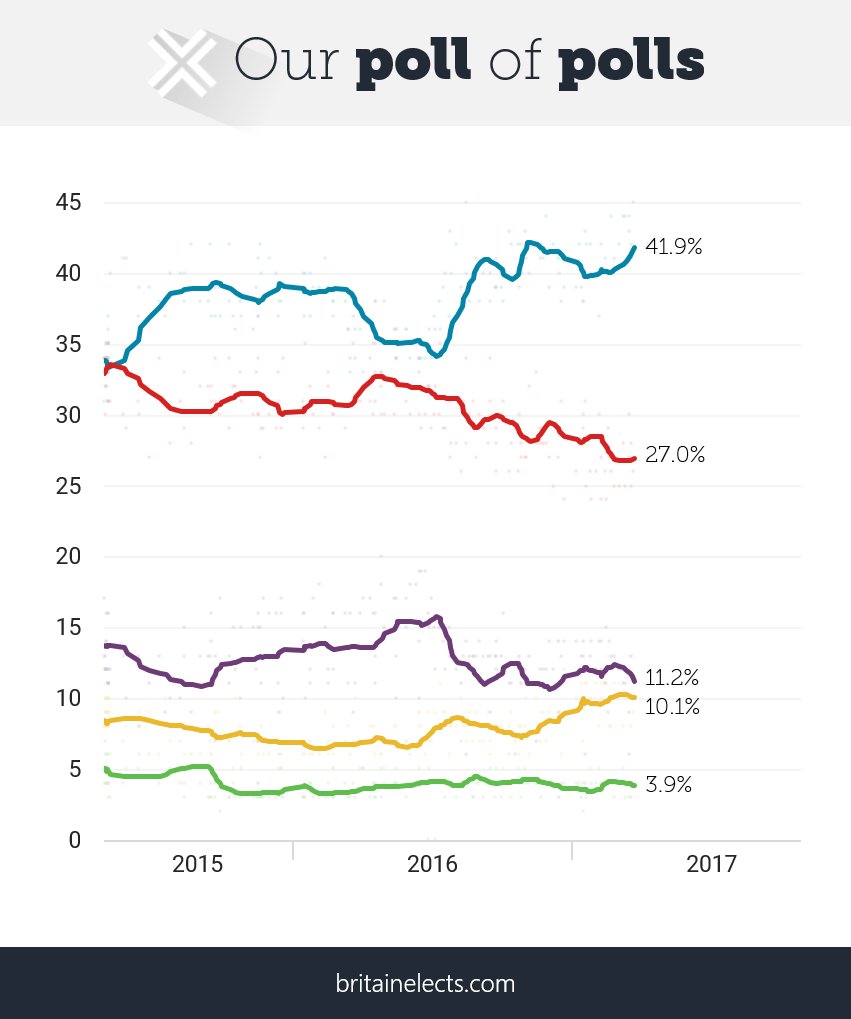 The UKIP polling support is clearly moribund, with the resurgent Liberal Democrats looking set to overtake them shortly. This has been borne out in a large number of by-election results in recent months, mostly council seats but still telling a strong story. UKIP votes have been slashed from the previous election in many of the contested seats, down to between a third and a half of their former vote share.

I watch these closely, and every week (Thursday night & Friday morning) you'll find the results with my comments re-tweeted on my Twitter timeline. The writing is now very clearly on the wall – and perhaps this is indeed the best time to get out and make oneself nominally available to any suitably-positioned new movement that could do with having on board an established political figure to give it some weight.

That could well be the calculation at work here.
Posted by John M Ward at 13:56